Bite of the Pike

Trip Introduction:
This is the second trip I have taken with this particular group, except for one substitution. At the last minute we decided to change our trip from an out and back to shell lake to a loop from EP14 to EP16. It was worth it.

We left VNO at 6am and headed for LIS. We had a long day ahead of us. Our plan was to head from LIS to Hustler on day one. There are quite a few portages on that route including a 210 and a 260ish. We stopped at the Devils Cascade, and also on Con Island for lunch. It took us about 10 hours to make the trip to Hustler, in a group of varying skill levels. None of the portages are all that bad, but after you have a canoe on your head for 160 rods or so I always slip into some sort of trance or maybe just blackout. I couldn't remember alot of the trail on the way back for my pack. I was in the BWCA for the opener this year, and after the Mudro to Fourtown series in the rain with bugs it all looks easy. When

we got to Hustler the site we were shooting for was taken, so we tried the one near Emerald Lake, and it didn't look good for our three tents, so we sent a scouting party over the portage to Emerald. We decided to camp at the northern campsite. The portage was pretty covered with downed trees, but it was little used and I always like that. The campsite was great, it fit three tents and our shelter. The fire grate was in a great spot up against a rock and near the shore. the site is up high against the water, which was very clear and basically a shear drop. It made for great jumping into the water. There were plenty of minnows, crayfish, and leeches in the water, but we couldn't catch a fish to save our lives. We ate steak on the grate, onions, and mashed potatoes that night and slept well. 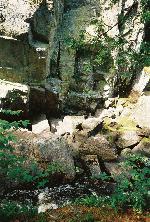 We decided we would find the fish on Emerald Lake. All day no luck. We did a fair amount of relaxing and swimming, the weather was great and the bugs were gone. but NO FISH! This campsite is amazing for tent sites, cooking, fires, solitude, swimming and cliff jumping right from the site, but not for fishing. Two of our group portaged to Hustler and caught a few bluegills, so we decided to make a day of it saturday. All in all a great day except for the lack of fish. 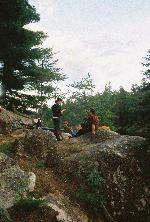 We ate breakfast and packed a bag with neccessities, lunch, and everything we would need for shore lunch. we will catch fish! All three canoes went to Hustler and we did some cast and retrieve and trolling. we were going to paddle up the North end and check out Posse lake. As we went along, the worst fisherman in our group landed a Northern, it was as if the keystone had fallen. Our luck changed from there on out. We managed a few smallmouth, but it was mostly Northern pike. By the time we

got to the campsite on the North end of Hustler we had boated 5 Northerns and several SMB. We kept one SMB and one Northern for lunch. After we cleaned the fish and were cooking them, Vince caught a NP from the campsite and we decided to eat that one as well. While that was cooking I caught another from NP from shore and threw it back. They were all decent sized NP at least 24" long. Very fun to catch and easy enough to get in the boat without a net. We never bring a net. Just a side note, the vegetarian in our group is the one who likes to smash the fish in the head with a rock, go figure.

We were tired from fishing and paddling against the wind. Adam, Greta(my wife) and Steve decided to go back to Emerald for some R&R while Rose, Vince and I kept fishing. we all piled in my SR Quetico and lesiourly floated along the lake. we caught fish pretty much everywhere. It's a good day when you lose count, isn't it? We ended up near the portgae to emerald, the sun was getting low, and we were in "One more cast" mode for about an hour while the fish kept biting. We brought back three NP for dinner, and they were perfect. There was enough that the dog got some. We all went to sleep with full bellies after a day of BWCA perfection. 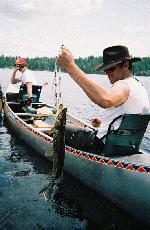 We packed up and decided to get the 310 rod portage out of the way towards Oyster Lake. On our way out of Hustler I caught the biggest fish of my life. It was a big NP. Our first view of it was when it jumped like no NP i have ever seen jump. about two feet off the bow the entire fish went airborne and came down like a cannonball. This is when my wife in the bow starts screaming terrified of this dinosaur i have on the line. She turns pale and basically holds her paddle like a club in case it attacks. I am waiting for my friends to get there film developed and am praying that a picture came out. Like I said, we don't bring a net, and I sure was wishing I had one. It was too big to put my hands around its head, so after much contemplating and several attempts i decided to wrap my left arm under and around its head and my right arm over and under its belly and pretty much pick it up like a baby. That worked and I got that slimy so-and-so on my lap and hoisted it for the picture. It went back in the water and thrashed away toot-sweet. I have never felt adrenaline like that and it took along long time to wear off. somewhere along the 310 it did.

We portaged the 310 in a good mood after "the big one". It was a little buggy but we sang songs and it blew by. On oyster the site we were after was taken so camped on the middle site of the island. Not sure if this is really an island, I never got down to the end to see. The site was great, plenty of room, another nice big rock fore pit, warm water. The Latrine was covered with orange slugs though.... There is a nice tent site in from the shore but beware, a widow maker hangs over it that is hard to see. We set our tent there and then I saw the widowmaker while trying to hang the bear bag. We moved our tent closer to the water and it was a good site. The campsite has lots of big Arbor Vitae trees but it make hanging the bag a trick. We went swimmimg and had soup for dinner. We went to bed satisfied after accomplishing the 310 rod portage, landing a big fish, and setting up camp.

Knowing that tomorrow is our last day we all basically relaxed today. went swimming, stared off into the lake, explored the shore a bit. Cut firewood and lazed around. It rained for a few hours and we all sat in the shelter eating peanut butter and raisins. After awhile Vince and I decided to go paddling in our rain suits and do some fishing. We fished the shore with no luck for quite awhile. It was raining on and off. We saw some otters and a bald eagle.

After several hours Vince boated a 30" NP and we decided to keep it. we paddled back to the camp and showed off our catch. The rest of the fish we have fileted and fried, but this one we just gutted it and removed the head, filled it with onions, S&P, and butter and wrapped it in foil. we had to put it on the grate at an angle to make it fit. 15 minutes per side and the meat just fell off the bone. After a week of fried pancaked and fish, and even fried summer sausage bacon, etc etc this was refreshing and easy! we got every bit of meat off the fish and all that was left was the skeleton. Again, the dog got some. We stayed up late around the campfire telling stories and laughing, knowing this was the last night in the back of our heads. 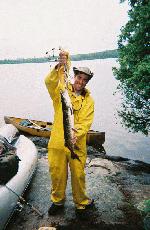 Woke up to rain. It stopped raining long enough to pack our wet tents and eat breakfast. breakfast was what ever was left. rice, foil pack chicken, PB, very thin coffee with maple syrup in it (good!). That was about it. We headed out. It started to rain and rained the whole way out. we decided to skip the portage into agnes and do the beaver dams instead. The dams werent bad going downstream, but the bugs were fierce in the marsh. We saw alot of ducks. The rain really slowed us down and we were about 45 minutes late getting out. we passed a bunch of people heading in that day and were thankful for our good weather and that is was our last day and not our first. We passed a group of guys who had a cooler and a bunch of rubbermaid containers, one of those suitcase stoves, and alot of stuff in garbage bags, and no rain gear. There canoe literally looked like a trash barge. I wished them luck as the decided to shoot the rapids on the Nina moose river after their fourth trip across the portage.....

We made it out, tired, wet, and starving. had our showers and Hamms at VNO and went to Cranberries for our first meal since scraps that morning. It was about 7pm, we went back to VNO, remembered what TV was and all fell asleep with the tube on. Next day we drive back to chicago and back to work....... boooo