A Short Trip on Crab Lake

Trip Introduction:
This was our first trip into the BWCA, though we have camped and canoed for many years. I want to first thank the folks on this forum. I picked up a lot of good solid info here that helped with our preparation. We're from Virginia (the state, not the town) so it was a long hard drive up to Ely for my wife and I and our grown son. This trip was basically meant to celebrate his Graduation from Virginia Tech. Voyageurs North set us up with a MN3 canoe and packs, but we brought most everything else. Our paddling goals were modest and we didn't really go as far as we planned, but we enjoyed every minute of the trip. For a canoe guy like me, it was really exciting to see Ely, MN. A whole town mostly centered around self-propelled boating and camping and bustling with canoes is something I never thought I'd see.

When we woke up in VN's bunk house early on Sunday, the wind was rattling the windows. We stepped outside to temps in the mid 40's, rainy, and windy, not really what we were expecting in mid-July. The folks at the outfitters were as groggy as we were and no one seemed real certain about how we were going to get across Burntside in the wind and rain, (at least, I wasn't).

One really hairy boat ride later, we were standing alongside slow moving Crab Creek, lined by lilypads and tall grasses and plenty o' mud. Still cold, still windy, we started paddling. This is a trip that should take 2 hours in high water, but it was low water and we had a very heavily laden canoe. It took us 3-1/2 hours. We were noobs and we kept debating the route and we crossed at least 10 beaver dams and several other obstacles and one short portage. For me, it was The Real Thing, wilderness adventure-wise. Lotsa heave-ho-ing the boat, paddling in lilypad-clogged swamps that slowed us down, and beaver dam after beaver dam. My wife was stalwart, though stoic, my son was unstoppable, and I was jus' flat lovin' it. 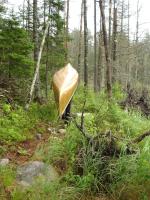 Anyone familiar with this area knows we were barely a stone's throw from civilization, but it felt as wild as anyplace I had ever been on the continent. We pressed on and, eventually, we reached Crab Lake. where the wind got stonger as we got weaker. We started hunting for one of the campsites along this lake. There were maybe 5 sites on this 1 mi.x 2 mi. lake, only two were ever occupied besides the one we chose and none were in sight of the other. We got off the lake around Noon. We had planned to press further into the wilderness, but we were spent and this site looked just fine. So there we set up and there we stayed.

We built a fire, set up a tarp, and tried to get warm and dry. That involved a lot of chopping and sawing and so forth. Dark does not arrive until 11 pm so we had lots of time to cook dinner each night. The first night, I made "Campfire Pizza" in the Dutch Oven (yes, we lugged a cast iron 10" DO into the wild). The pizza was, no kidding, delicious. Cooked the crust up-side down with saute'ed vegs and crisp Pancetta ham and cheese sprinkled on top. Sometimes, Life is good, like the T-shirt says. 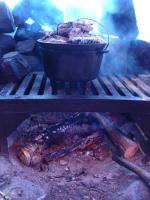 After a chilly night, Monday dawned warmer and dry. We took our time making breakfast. The deal I made with my wife was that we would base-camp and not pull up stakes everyday, so we set forth on a daytrip, looking for moose. No such luck, but my son started fishing and he just rocked it. Lots of Smallies and Largemouths and various sunfish, mostly over 8". Fishing is not really our thing. If we had known what we were doing, I think we would have caught much larger ones (I hooked into a big 'un but it got away, there's a surprise). My son caught enough 10-inchers for dinner, which he fileted and we deep-fried in the DO with cornmeal breading and cous-cous. Not bad, this whole fishing/eating/camping thing.

Every evening brought brief showers and beautiful sunsets. The showers led to rainbows and clouds that only made the sunsets nicer. 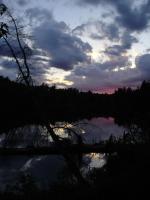 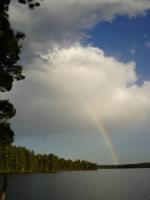 Every day we saw and heard loons on the lake (and not much else). After midnight, we heard wolves, baying at the nearly full moon.

Rain blew through from time to time. It was a little cloudly, but not so cloudy that I couldn't manage to get a four-star sunburn. The bugs were determined, but not really much worse than Northern Va, except that the warming weather brought out biting flies that were worse than the skeeters and not really that impressed by DEET.

We took another short day trip to Lunetta Lake, which was not that scenic but, still, we enjoyed collecting photos of the flowers along the way (hey, if you don't see a moose, you have to go with what you do see.) 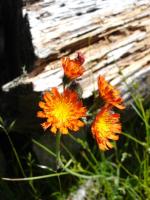 We cooked and ate and cooked and ate, not wanting to carry out all the food we had lugged in. DO Biscuits with chipped beef for breakfast. Trader Joe's boil-in-a bag Indian fare with dried chicken. Apples and cheese and sausage snacks rounded things out. My son had home-dehydrated fresh food for the trip which came out pretty tasty.

Another night of brief thunderstorms and awesome skies.

After four days and three nights, we decided to head back because the drive home was long and tough. It was a short paddle and then a long hard portage back to where the tow boat picked us up, but we made it back to Ely, where we drank beer, ate food we didn't have to cook or clean up after, and loaded up on souvenirs.

The BWCA is an awesome place. Even my wife, who was not crazy about this trip at first,loved it. I wish we lived closer (or gas was cheaper). My thanks go out to everyone who has done so much to preserve this truly unique wilderness.