Trip Introduction:
this trip was planned to enter sawbill. due to the fire and closing of entry locations i went west.

Thursday, September 15, 2011 the drive up from ne iowa was uneventfull. i arrived in ely at 7:30 am, checked into pirigis and picked up the prism. i made a couple stops in town and headed up to the echo trail for a nice slow drive thru the fall color that was beginning to take place. i had a 6 pack of pig's eye, as my plan for the evening was to sleep in the subaru and enter on friday the 16th of sept.

Friday, September 16, 2011 a cool evening kept me stirring. i popped out a few times to view the nite sky and was not disappointed. the east sky started to lighten and i grabbed my 2 packs, and prism and off to the portage a went. what a beautiful day this will be. the best of the week, as it turned out weatherwise.

i paddled thru the pauness lakes, and made my way to shell where i would spend a few nights. grouse were plentiful as were the hunters. a few shots rang out here and there, good for them i thought. it wasn't until the second night when i was awoken to "hey jude" at one in the morning, i relized it was time to head deeper into the bwca.

Saturday, September 17, 2011 another beautiful morning. the beaver on shell were busy during the night. i was camped on the island site, the middle location. beaver were thick. i got up during the nite to see stars and there were at least 6 swimming in front of the site. they were giving me heck with tail slaps. 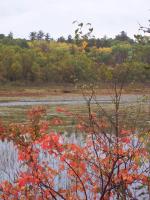 Sunday, September 18, 2011 i portaged and paddled thru heritage lake. not a soul in site. now this is more like it.another beautiful morning. the water levels were really low. it made the shorter portages, longer and muddier. just a longer walk in the park. what a beautiful lake this was. both sites open, i thought about a night here, but i had my mind made up for loon lake. i arrived at loon to a beautiful sand beach put in. i enjoyed the clear water and the inviting sand. loon was still as glass. time to find a site for a few nights. not a paddler to be seen. i chose a point site, west facing and awesome views.

this was an awesome site. i spent the days reading"into thin air". i just could'nt put the book down. i enjoyed starry nites, and mild breezes. my wife will have to see this site some day.

Tuesday, September 20, 2011 packed up i headed south to spend a few nites on the pauness and do a little fishing before heading out. what another beautiful morning. ducks and geese were plentiful. not another sould to be seen, or heard. devils cascade was bone dry, but the colors were really coming on. an easy climb to the top brought me to pauness. the point campsite was opening up so i paddled a bit while the couple prepared to leave.

Wednesday, September 21, 2011 i spent the day mostly under the tarp, rading and drinking coffee. the weather gave me a few breaks to paddle around a bit. the lakes were busy,due to people being re-routed from the east side.

Thursday, September 22, 2011 up early as usual i had a nw wind and rain blowing me to my car. i had decided to head to fenske campground for the last night. i was ready for a burger and beer and the brew pub in ely was awesome.

man how the weather changes. i had such an easy paddle out due to the wind. paddlers coming in were faced with wind and rain in their faces for the length of the river. i arrived at fenske for the nite. once again rain, and drizzle persisted. a good meal in town, and nite sleep, i headed home the next morning. a very good trip. 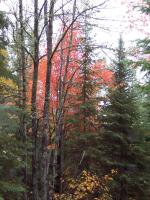