view flash version | view topographic map
Saganaga Lake entry point allows overnight paddle or motor (25 HP max). This entry point is supported by Gunflint Ranger Station near the city of Grand Marais, MN. The distance from ranger station to entry point is 55 miles. No motors (use or possession) west of American Point. Access to Canada (the Crown land and Quetico Park). Large lake with many campsites and easy access. This area was affected by blowdown in 1999.

Entry day. We awoke to a dark, overcast morning with a little drizzle in the air. "A nice cool start" I said to myself as we loaded the outfitters vehicles for the drop off at the tow launch. Taking a quick moment for a photo opportunity, we were off to our drop site, Hook Island on Lake Saganaga. Winds were light and at our back as we pushed off on our Quetico adventure.

45 minutes into the morning we pulled up to the Cache Bay Ranger station to pay our fees with "Janice" our Park Ranger. We had made every attempt to make this, our 4th visit to the Quetico, a short stop. We had planned ahead by purchasing our fishing licences in advance and bringing cash to pay the bill. We were in and out of the station in 30 minutes - a new world record for us, taking only a short time to purchase a locally made power bar for our (what turned out to be - easy) push across Cache Bay to the north. We arrived at the Silver Falls Portage in record time compared to our trips in the past. With a gentle tall wind pushing us all the way into the portage, we savored the assistance knowing that Cache Bay is generally not so giving! We mounted up and pushed our way through the portage taking it in our customary two-portage effort. When you haul in all the gear we do for base camping, one-portaging takes Arnold Schwarzenegger types - that, we are not! The portage is 130 rods and is a mixed bag of terrain from wide flat stretches to cliff like rock formations towering 20 feet. As we loaded up the canoes and pushed off, we had wondered what awaited us on the Silver Falls outlet. Earlier in the year, many had reported that canoes were nearly overturned as the rushing water pushing out, away from the falls were so strong. Janice, the Park Ranger had mentioned it to us with little concern earlier in the day as well. Due to the recent lack of rain in the area (which had almost warranted putting a fire ban into place)we were welcomed to the outlet with limited resistance, allowing us to push on by. We made our way northeast along beautiful Lake Saganagons all he way to Boundary Point and arrived there at 1:30PM after taking a brief lunch break in route. We were ready to find a campsite and strolled up to a very nice site within viewing distance of Boundary Point. We were tired, so we decided to make camp. The site offered good wind breaks and a 30' cliff view of the lake to the south that was very nice. The BWCA and Quetico is one of the few places on earth where 7:00PM really sounds like a good time for bed after a long paddle! 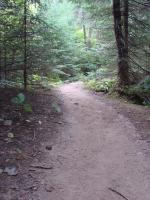 Awoke to overcast skies and a much colder temperature today. Not a bad way to spend a leisurely day around camp! Since we were all a bit sore from our travel Friday, we elected to fish near camp and in the wind sheltered bays - and for only brief periods :) We were fortunate in that we were able to land a couple of eating sized Northern Pike. After a long, cool day of resting, we had a nice Northern meal and turned in early as the wind was howling and temperatures were dropping. 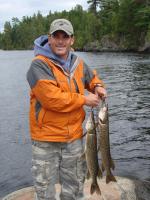 Today started with lows in the low 40's! We were all glad we managed to fit some warm clothes into our packs as we were wearing them all. The day was bright and clear, but the wind was still driving through the area 10 to 15 mph. We were determined to spend this day in a fishing/exploration effort. We weren't looking to eat fish so we practiced catch & release and fortunately had the opportunity to do it often. We noticed an eagle's nest off in the distance and decided to paddle over a get a closer look. Off the waters edge about 100 yards atop a burned out/dead pine tree was a very large eagle's nest calling out to us. We decided to venture nearer to it by land as the area around it had been burned off some time ago and made commuting through the young forest more manageable. With a pair of eagles watching in the distance we made our way through the overgrowth to the base of the tree. We found lots of bones of previous meals scattered around the base of the tree including fish, turtle shells, and large vertebrae that looked like a larger than cat-sized animal. This proved to be and interesting adventure and close to our day. 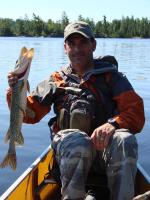 With lighter winds and a warmer, clear day, we elected to venture farther down lake to the East. We paddled into Moose Bay on the Southern side of Lake Saganagons to do some more fishing. We had some tremendous fishing along the banks of the shallow bay on the end of the weeds catching several Northerns and smaller Smallmouth Bass. We decided to portage into Moose Bay Lake and spent much of the day fishing the area there. The northern lobe of the lake is quite shallow throughout - only 3 to 4 feet in depth, but the other parts of this lake were fun. As the sun drifted to the tree tops, we elected to begin the paddle home, again with a good day of catch & release behind us. Our plan was to break camp and begin our trip South and West back toward Silver Falls in the morning, but not before enjoying a beautiful sunset on Saganagons.

We woke Tuesday to the first of our 2-day scheduled return trip. The winds all week had not changed direction and we were looking at a stiff head-wind for our return run. We had planned to leave early (6:30AM) to get a jump on the winds, but found out quickly that plans made in the Quetico often need to be adjusted :) With headwinds all morning, we worked our way back to Silver Falls and finally settled on the first campsite to the north of the Falls. Most everyone who has been to the area has seen it before as it is on a point as you turn to go into Saganagons through the narrows. It ended up being a wind, hot day. The open point with little shade didn't offer us much relief as we sought a cool place to nap a bit in the afternoon. Later that afternoon, the winds dropped off and dead-clam prevailed. It was a welcome change as we were a bit exposed on the site we had selected. That evening, we decided to fish the area as we had dinner plans that included fish on the menu, so we headed out and scored a couple of Northerns for dinner. Our team cook put together a fine meal consisting of baked fish in butter, onion and garlic salt (yes, we brought an oven); kuskus and peas and a three cheese biscuit baked fresh in camp - YUM! Later that evening, we decided to take a quite paddle in the bay to the north of our campsite and were overjoyed with the wildlife we encountered! First, a huge bull moose welcomed us as we rounded the corner of the bay. I have been on many trips into the BWCA and Quetico, but had never encountered a bull moose, now I can add this to my life's accomplishments! It was VERY cool and we got close to him. We also saw beaver and Eagle that evening making our trek all worth while!

Again, the best laid plans...We awoke early hoping to make the portage across Silver Falls and the subsequent paddle across Cache Bay before the winds were up - no such luck! We woke to 15 to 20 mph winds out of the Southwest and knew we had a hard day ahead of us as we planned to cross Cache Bay. We ate a quick breakfast and charged off back across Silver Falls portage and continued our paddle to the entrance to the large water on Cache. With a quick stop for an energy bar, we rounded the corner into Cache and were greeted with 1.5 foot swells and white capping waves at our 1:00. I have been on few trips through Cache Bay when we didn't have to deal with whitecaps, so it wasn't a surprise that we would face them this trip - just not what we would have hoped for! After rounding Cache Point we turned Westerly and enjoyed a tail wind for the remainder of our paddle to Hook Island. We arrived early, due to our early start and had camp set for the day by 11:00AM. We enjoyed a pancake breakfast/lunch since we had deprived ourselves of a decent breakfast that morning. The afternoon was windy but with nice temperatures, we were able to get some exploring on Hook done. We walked the entire parameter of the island that afternoon and enjoyed our last evening of the trip around a great campfire. We decided to turn in and 5 minutes after we zipped the tents, the rain started. It rained from 10PM to 4:30AM in sheets!

The best part about arriving at your departing point the day before, is that you don't have to paddle to the pickup location! We awoke to a wet camp and put our camp away wet for the long ride (12 hours) home that day. We enjoyed the trip back to Seagull Canoe Outfitters and enjoyed a nice HOT shower before climbing back into the car and making the long portage home. The four of us will long remember our Quetico foray! It was one for the history books :)