Number of Permits per Day: 5
Elevation: 1166 feet
Latitude: 48.0356
Longitude: -91.8301
On the Water- Monday July 20th-
On the water late considering how far we need to go today. Up the Horse river to the falls by 6pm. Started raining and NO campsites available. Mudrow-Alruss-Tin can Mike-Horse Lake-Horse River-Basswood. 13 miles by water. (not counting portages)

Trip Introduction:
I'd never gone in through Mudro before, so this was a totally new trip for me, and I was looking forward to it. My excitement was tempered, however, with the fact that we also had three rookies on this trip with minimal or no wilderness camping experience. I wouldn't have invited them if I didn't think they could handle the challenges of the BWCA, but you never know how they'll respond until they're out there. And all I can say is by the time we left on Sunday, I was really impressed with them as I was with the entire group given some of the circumstances we faced.

We arrived in Ely on Tuesday evening. Stopped at the outfitter to pick up a few odds and ends and make sure the canoes would be at the entry point the next morning. Ate dinner at Sir G's. I don't know what exactly they do to their pizza, but it is some of the best I've ever eaten. If you've never eaten there, you have to try it at least once. You will not be disappointed.

One of the guys in our group, Erik, owns a house in Ely, so we were able to crash at his place after dinner. Got our gear squared away and then we had some time for fun. The Centipede game brings back memories, and a few guys started playing NHL Hockey '96 on the Sega Genesis. There were a few fights that broke out on the ice, and since we weren't able to watch the Stanley Cup Finals (Erik doesn't keep the cable hooked up), this was almost as entertaining. 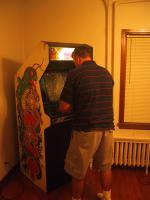 Woke up at 4:30, got the vehicles loaded and made it to Britton's by 5:15. After a hearty breakfast, we stopped by TGO's place to pick up leeches, ciscos and crawlers and headed out to EP 22/23. We made it to the entry before 7:30, and I was really impressed with how the group was working. There was one group ahead of us who told us they were headed up to Gun, which was our original destination as well. But I also knew we'd be a little slower with three rookies and me having to rudder a canoe for the first time on a trip, so I was already preparing myself to stay somewhere on Boot if we found an open site. There was a light rain/drizzle that made a few of the portages rather slippery, especially the 140 rod portage just before Fourtown, but no one slipped or injured himself so things were going well. By the time we made the 50 rod portage from Fourtown to Boot we'd heard from a few groups headed out that Gun was full so instead of pushing up that far, we simply decided to stay on Boot, which was a good decision because the wind was picking up and my steering abilities were being tested.

Site 1092 was open and we claimed it before noon. Not exactly the best site for a large group, but the view across to the rock wall on the western side of Boot was beautiful. The rocks up to the site were covered with lichen and very, very slippery after the rain, and I thought we might twist an ankle or something just trying to unload our canoes. Got the fire started and fried up the steaks for an early dinner. The challenge we'd face in cooking meals was finding enough dry wood (we don't bring a stove). There were a lot of downed trees around the camp, but they were either soaked or rotten. So trying to get the fire hot enough to cook was never easy, but we managed.

Then it was time to fish. Fishing was slow in regard to the total number of fish, but a few of the guys managed to catch some really nice walleyes, including a 26" which was released. And one of the rookies, Brett, caught his first walleye ever, 21", so he was pretty stoked. 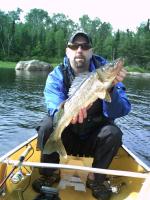 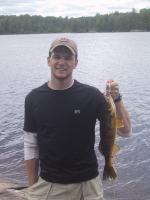 Another day mixed with sun and clouds and more rain. Fishing continued to be slow and we began to realize that the walleye were feeding on the Mayfly hatch. They were not all interested in the leeches on plain hooks (sorry TGO), but they would occasionally strike on a crank bait or soft plastic. Brett caught his second walleye ever, 29". Whatever he was doing, he certainly had the touch.

My friend Tom and I portaged up into Fairy to see if we could find anything up there, but we got skunked. Our excitement came on the way back to Boot. We had just come to the Boot side of the 15 rod portage and had to wait a minute for another traveler to get his scratch-built cedar strip canoe up onto his shoulders before we could put in. As he was lifting his canoe, he tripped and dropped it on a rock which put a 6"-8" crack in the bottom along with a 1/4" hole. We told him he could come back to our campsite and get some duct tape and try to seal the crack. He managed to paddle his canoe back to our site without taking on too much water, and we put 4 or 5 layers on the outside and 4 on the inside. We saw him later that evening as he was returning from his day trip up to Gull and he told us that he hadn't taken on an ounce of water. Kudos to duct tape!!

What started out as a light drizzle in the morning turned into a steady rain that lasted well into the afternoon with highs only in the upper 50's. We went out fishing and lasted until about 11:30 or so with absolutely nothing to show for our efforts. Tom and I were so wet, cold and miserable that we decided to dry off the best we could and take a nap in the tent while the other six members of the group continued to fish. They came back to camp an hour later and all of them had been skunked as well. According to the National Weather Service we only received .33" of rain, but it seemed like it was a lot more than that.

Without any fish, we had to do something I've never had to do on eleven previous trips: eat something other than fish for dinner. The peanut butter and jelly sandwich thins weren't the best things in the world, but they hit the spot along with some of the other odds and ends we had in the food pack. We didn't go hungry.

The rain eventually stopped and we went back out in the evening. Three of the guys landed walleyes in the 20"-22" range and one of them lost a fish that was in the 30"+ range. He got it up to the side of the canoe only to watch the line snap. They weren't hitting fast and furious, but at least they were big. 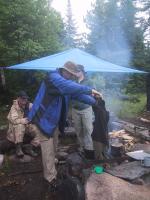 The day started out dry and we were hoping that things would dry out so we wouldn't have to pack up camp wet on Sunday morning. Things were looking good until about 5:00 p.m. when it started to rain AGAIN. Not as heavy as the day before, but it was steady enough to soak most everything that had dried out in camp. Nevertheless a few guys had managed to produce a few walleye earlier in the day and we had a great fish fry for dinner. Very nice to be eating fish again.

We woke up around 5:30 a.m. to break down camp and head out. The morning was overcast with some light drizzle. Needless to say most everything in camp was soaked. I swear the gear pack with the tents and food pack ropes was at least 10 lbs heavier than when we came in because everything was so wet. We broke camp at 8:30 and headed back to the entry point in a light rain. Made it back in less than 3.5 hours and we were glad to get out of the rain.

What really amazed me about this trip was the good attitude everyone, including the rookies, had throughout the trip. Our primary purpose on this trip was to fish, fish and fish. And despite the weather conditions and low numbers of fish produced, I never once heard anyone seriously gripe or complain. We were all frustrated at one point or another with the situation, but we all manage to overcome that and still have a great time together.

One postscript: I've learned since we got back that four of the guys got pretty bit up by chiggers. They weren't all in the same tent and weren't the only ones collecting wood, so who knows how and when they were infected, but it's been an unfortunate after-effect from an already challenging trip.