Number of Permits per Day: 5
Elevation: 1166 feet
Latitude: 48.0356
Longitude: -91.8301
On the Water- Monday July 20th-
On the water late considering how far we need to go today. Up the Horse river to the falls by 6pm. Started raining and NO campsites available. Mudrow-Alruss-Tin can Mike-Horse Lake-Horse River-Basswood. 13 miles by water. (not counting portages)

Trip Introduction:
First some background on this trip. Back in May 2002 I took my friend Mike into the BW. My son and a friend of his had already been in the BW for a week. We rendezvoused with them back on Ima lake. For the next week we traveled, to Frazier, Thomas, Keana, Insula etc. Mike said he had never spent a more miserable week. He never wanted to be that cold and uncomfortable again. So six years later he thought he might try it again, and I thought an easier trip in warmer weather might work better.

We met at my cabin in Northern lower Michigan after work Friday, August 29 and started driving. Spent a night about halfway to Ely. Early Saturday morning I called Mikes room and woke him up (The lazy slug!) and we drove on to Ely, arriving at 4:00. Picked up our permit, checked into the Ely Motel Budget Host and went to the Ely Steak House for supper.

I got up at 5:00 Sunday morning. The light wasn't on in Mikes room so I went down to "The Great Outdoors" and introduced myself to Mr.TGO. When I got back Mike was up and ready to roll. We arrived at the Mudro Lake EP about 8:00 and headed out. Weather was warm, clear and windy. It was a tail wind so that was ok. We double portaged.

On the portage into Horse I was carrying the canoe downhill and met a man carrying a canoe uphill. I stepped aside for him, we said "Hi' and continued on. A short time later I met a woman carrying a pack. She stood aside, we exchanged pleasantries and kept moving. When I got to Horse Lake the man was coming back down the trail to get his packs. We talked briefly and then he identified himself as a ranger and asked to see my permit. I showed him my permit. He thanked me cordially. He was very courteous, friendly and helpful. When I said I'd never had my permit checked before he laughed and said that's what almost everyone says. He said there was no burning ban on Horse but he thought the only site left was the high camp on the narrows, so I thanked him and hurried over to claim the site. Before long camp was set up and we relaxed, watching the Labor Day canoe traffic going by.

Sunday evening after supper two young guys paddled up and asked if there were any open camps on Horse. I said I didn't think so, but it was nearly dark with wind gusting to over 30 mph. We said they could camp the night at our site. They said they had two more canoes, four more people and two dogs. Oh well, not much else you can do. It's nearly dark, so come along. We were still within the legal limits, four canoes and eight people.

There were two couples, Ted and Paula and Paul and Janet. The two young men, Bryan and Justin, were the sons of some of the others. I'm not sure who owned the dogs. I hope I got the names right.

I have never seen people with so much stuff! They started by bringing up five (!) coolers!. Then came the big dry bags. Then the portage packs. Then duffel bags and fanny packs. More dry bags. More packs of various design and capacity. Then there were the dogs, a gray old dog of unknown breed and a miniature schnauzer. The old gray dog was friendly and begged a lot. The schnauzer sent most of it's time peeing on Mikes tent. Mike was the only one that seemed to object.

Sitting around the fire they broke out beer, liquor, VERY good cigars and various snacks. They were generous with their stuff and we had a great time sitting around the fire talking late into the night. One lady, I think it was Janet, was so impressed by the brightness of the stars and the Milky Way. It was a glorious night sky.

In the morning they made coffee with Baileys and passed out granola bars while the two young guys went scouting for a campsite. Paul left me four cigars to enjoy around the campfire. About 11:00 they loaded up and left. We had the camp back to ourselves.

It remained warm and windy Monday. I did some hiking and collected firewood and took a bunch of naps.

While fishing Mike found a 10 pound bag of potatoes our guests had forgotten down by the lake. We had fried potatoes and fish for supper.

Tuesday was rainy and cooler. We didn't feel like taking the canoe out in the rain so had another camp day. I did a lot of walking up the hills behind camp, watching birds and scrounging firewood. Mike would put his fish on a stringer tied to a bush and fish on down the shore. 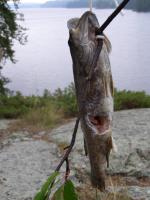 One smallmouth was partially eaten by a raven in his absence.

Wednesday it stopped raining. We took the canoe out and paddled and fished around the lake. It was still pretty windy and Mike wasn't comfortable out in the waves so after a little fishing we headed back to camp. I started talking about some day trips I'd like to do in the next couple days. Mike got kinda morose. He looked at the map and commented on the distance and number of portages. He looked even less happy. I asked if he was ready to quit and he admitted that he was very lonely for his family. I agreed to head back the next day. Wednesday night we saw the Northern Lights.

Thursday Mike was up early for the first time on the trip . We were back on the water before 8:30. We donated the potatoes to a party of six guys that were coming in to fish Horse Lake and we went back to civilization.