Trip Introduction:
This is my son (Jake) and myself's second trip of the year. But this time we were introducing our friends to the BWCA for the first time. This trip would consist my friend and coaching buddy (CJ), his dad (Chuck), Jaron (12), Joe (10), and Austie (8). We took two canoes - one 18.5 foot aluminum canoe and a 14 foot Royalex canoe.

Tuesday, July 28, 2009 Left town at 11:15 am and drove straight thru with gas/potty/and a supper break. [paragraph break]Stopped in Two Harbors because CJ forgot a bag of goodies. Made PB and J on the canoes in the parking lot of Pamida. Got to the Sawbill Campground around 9:30. Set up camp in the dark. Made a quick campfire, but wood was wet. Our neighbors warned us about the campground bear.

The old timers woke up around 5:30. Got rest of kids up by seven to go watch the "Leave No Trace" video and got our permits. Started paddling at 9:00. Moved our way up Sawbill lake. CJ, Austie, and Jaron were lighter, so they were always the lead. They came across a cow moose along the west shoreline. As we made our way up the lake the first campsite was full. Then the second and third spots were full. 4,5,6, and 7 were full also. All spots filled and one ended up getting filled by a group that passed us. [paragraph break]Decided to take the bog/river down to Smoke Lake. Started our journey at noon we didn't make it to Smoke Lake until 3:30. I would never suggest this route to anyone unless looking for an adventure. An 18 1/2 foot canoe fully loaded with twists and turns, beaver dams, downed trees, and three feet of mud. Got to one point we had to portage around a bend due to down trees. Broke out the head nets and Chuck decided to walk the bank as best he could. But like they say what doesn't kill you only makes you stronger. By the time we got out, CJ had caught the first smallie of the trip and picked up his dad (who made it out on foot faster than we could with the canoe).[paragraph break] All sites were full on Smoke, but we were lucky enough that someone was just leaving. Finally set up camp and made steak and baked potatoes for supper. Needless to say we crashed early this night without fishing. 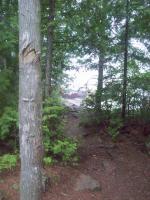 CJ woke up in the middle of the night for a bathroom break, when he heard a slow thumping noise and he could see a bull moose in a clearing roughly 30 yards from our site. We woke up and had bacon and eggs for breakfast. Afterwards we started to explore and fish the lake. Got out just a little bit and decided to split up around the island. When we came around the corner of the island we could see a storm heading directly at us. There was no time to tell CJ and Jaron of the storm, so Jake and myself headed back to camp as fast as we could and made it just as the storm unloaded. CJ and Jaron found shelter on the island. Had ramen noodles for lunch, warmed everybody up from the cold rain. [paragraph break]Decided to try fishing in the afternoon, split up again meeting on the opposite side of the island. Jake caught a smallie and I caught a walleye and lost a northern and smallie at the canoe. CJ caught a smallie. We had chicken, corn, and Scalloped Potatoes for supper. Fire was hard to maintain due to the dampness of the wood.

Got up around 6, CJ and myself headed out across the foggy lake. Sun looked mysterious as we headed across the lake trolling. CJ caught a small walleye before we even got to the island. Made our way back to the inlet and changed our tactics. CJ caught a smallie and I caught one seconds later. Then came CJ's biggest smallie of the trip and at the time he was fulfilled. Could see the kids were up, so made our way back to camp and made breakfast burritos. Decided we kinda had an idea what we were doing, so we took all the kids and Chuck out fishing after breakfast. [paragraph break]Could start to see that Joe was getting home sick, and I thought I had better get him on some fish and quick. We changed his rig up and I guided the canoe to set him up on some rocks. Wasn't a couple of minutes and he had a nice smallie on his line, until the line snapped because the drag was set too tight. Fixed the drag and rigged him back up. Within a small window of time Joe had caught a walleye and his first northern. Joe was on cloud nine, and it couldn't have come at a better time. Chuck simultaneously had a smallie on his line, which was lost at the boat (another drag issue). Austie had is pole bent over and then line snap (another drag issue). Came back to camp for hot dogs, brats, and Mac an Cheese. My buddy Joe did the dishes for me.[paragraph break]After lunch CJ, Jaron, Jake, and myself took the canoes over to Burnt Lake. CJ/Jaron made it into the bay before Jake and me, but by the time we were there, they were both reeling in northerns. CJ's was a little over 24 inches, but Jaron's was huge. He got it up to the boat and yes the drag was set too tight. The northern rolled and snapped the line, he was gone. Estimate the northern was close to 40 inches with about a 10 inch diameter head. Too bad no picture to go with it. Trolled al little more with no luck and then a storm rolled in. Headed back ot camp.[paragraph break] Note on the portage (90 rods) between Smoke and Burnt, this was the first time Jake has helped carrying the canoe. It was tough on him but he made it both times. Came back to camp, cleaned the northern and had a fish fry, with hamburgers, green beerns, and mashed taters. Did happen to go to fish remains and catch a huge crow and turkey vulture munching on the carcasses. Tried fire again but had to use stove to finish dinner.

Rained all night long and woke up to the howling wind. Ran down to check on the canoes, and everything was OK. Went up to make Chuck and myself a cup of coffee and ran out of gas. Started checking the forecast for the next 24 hours and found that it was not going to get much better. Started discussing the different options, when CJ woke up and stated he had two wet sleeping bags. The decision was made to pack up and head out today. The wind wasn't going to die down, firewood was wet, and wet sleeping bags, sounded like a recipe for disaster if we stayed. Made our way across the lake with the waves just under the gunwales of the canoe. My butt was puckering. Got through the portage and made the same trip down Sawbill. Took 3 hours from once we left the campsite to get everything in the truck and be on the road. Made it back to Illinois by 10 pm.

Things to note on this trip. Keep firewood dry