view flash version | view topographic map
Brant Lake entry point allows overnight paddle only. This entry point is supported by Gunflint Ranger Station near the city of Grand Marais, MN. The distance from ranger station to entry point is 45 miles. Access is a canoe landing at Round Lake with an 85- and a 35-rod portage to Brant Lake. This area was affected by blowdown in 1999.

Trip Introduction:
A trip planned on a total whim. Isn't that the best way?! :) My brother had been talking about buying a used canoe for some time now and finally decided to pull the trigger. Debbie at Seagull Outfitters on the Gunflint Trail had a 2008 Bell Northwind for sale, so we decided to drive up together and make a weekend trip out of the deal. And of course, Lauren would join us and I decided to give our dog Molly a test run on her first trip as well. Never taken a dog on a canoe trip before, nor I have been to the BWCA in October before.

We woke with the rising sun and stepped out of the tent to a chilly morning. Nothing a good camp fire, hot cocoa and breakfast couldn't cure. Pancakes and sausage was on the menu.

Today would be spent lounging around camp and fishing. We didn't paddle too far from camp, but did fish around Miles Island, Seagull Rock and did a bit of trolling on the big water. By mid-day is was getting pretty warm (60's I'd guess) and the lake was very calm. Aside from the dog rocking the boat from time to time, we enjoyed just casually drifting around all day. The fishing was again slow, but we did manage to catch a couple nice pike at the base of the Palisades. One was about 25 inches and the other 35 inches. We kept the 25 incher for dinner and boy did he taste good with the Cajun flavored Shorelunch and hashbrowns.

Evening time brought out another gorgeous sunset and we again enjoyed some quality star gazing, some shore fishing and a warm fire. I managed to catch a nice sized laker (25 inches plus) from shore on a Chartreuse Wiggle Wart. We even got to hear a pack of wolves in the distance howling! Very cool! 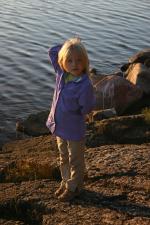 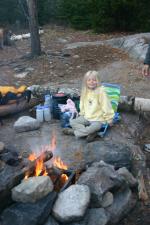 Morning time again brought with it a beautiful day. From the pictures you can see how vibrant the colors were and how calm the lake was. After a pancake and bacon breakfast we packed up camp and started to paddle back home to Seagull's dock. We fished and trolled along the way resulting in another lake trout in the big part of the lake just before you enter the small bay that the outfitter resides on. Again, the Wiggle Wart came through! :)

We arrived back at the dock around 11am, packed up the car and away we went back down the trail headed home.

All in all it was a great trip and I'm sure we got a rarity in the great weather we experienced in October. My brother was very happy with his purchase of the Northwind and the trip went off without a hitch. Aside from a couple canoes we saw on Saturday, we had the lake to ourselves. A couple loons were still around, but it more quiet at night than in the summer time.

I'm not sure I'd bring the dog on longer trips, but she did behave very well and didn't bark at all. Tent and canoe time with her went well.