Trip Introduction:
We decided to do an easy trip into the BWCA since this was the first time doing a canoe trip for all three of us. We had a great time, fishing was excellent, weather was great.

We arrived in Ely around 3 pm on Monday and after heading over to the Kawishiwi Ranger station to pick up our permit and then headed over to Jordan's Canoe Outfitters to bunk into our bunkhouse and talk with Mark. The bunkhouse at Jordan's was great. We then ate supper at the Rockwood Restaurant, the elk burger comes highly recommended. We did a little fishing below the dam at Birch Lake and then went back and hit the sack.

Ate breakfast with Mark at Jordan's and then headed to EP26, Wood Lake. Once we got all loaded up and then started down the portage. Thankfully this one is mostly downhill since I think we overpacked. We made it to the lake and got everything situated, since this was our first time, it took a little while longer. It took us a while to finally figure out how we were all supposed to paddle and turn but once we got it down, so wasn't to hard. We had one 18.5 Souris River Kevlar canoe for all of us. We were hoping to get the campsite closest to the portage into Hula and it was open so we took it and started getting set up. After camp was up, we headed out into the lake to do some fishing. We fished the narrows part of the lake and the wind was perfect that we could drift sideways right down through the narrows. Just about every pass through we would pick up a fish or two, mainly walleyes but one bass and a couple of small northerns. After a successful afternoon, we headed up towards the most northern island on the west side of Wood, it has a really deep hole just on the north side of it and we drifted through there with no luck, so back to the narrows it was. We headed back for supper and enjoyed a supper of steaks and spanish rice. After supper, we went out fishing again in the narrows but the fish seemed to have moved out. Went back to camp and slept the night away, well at least my buddies did. I was up most of the night with some miserable allergies.

We got up around 7:30 and had bacon and eggs and decided that today we would head into Good Lake. Found the portage to Hula, short and sweet with lots of bugs though. Hula is a lily pad, grass filled lake. Not sure it is worth fishing. Found the portage to Good. This portage is longer, muddy and not in the best shape. We think we found a wolf print on the portage though. Got to Good Lake, not a soul in sight. Both campsites were empty and nobody on the lake. We did see one solo canoer as she was coming out of Basswood. Fishing on Good was good, mostly bass and northerns. We found both species right in the weeds right out in front of the portage and we really didn't venture from there too much as we were catching a lot of fish. Had shore lunch of some walleyes we caught the day before on Wood Lake and we used the campsite in the narrows that is high up above the lake, it has a beautiful view. Filled our bellies with fresh walleyes, that was awesome. We kept a few northerns and several large sunfish from Good for supper that night. Portaged back to Wood for the evening. My buddy got quite a few leeches on him at the landing at Hula when we were coming back to Wood and he didn't notice them until later in the day, nasty little creatures. He itched for days where they were attached. Had fish tacos for supper and then hit a rock reef on Wood in the evening. This reef isn't far from the campsite and we hit the jackpot on nice walleyes. They were aggressive and mostly in the 19-21 inch range. We were throwing any shallow running crankbaits we could find and they were hitting everything we threw. It was great fun. Did that until around 9 and then went back to camp. The mosquitoes were so bad that we ended up just going to bed earlier than expected.

Breakfast was pancakes, bacon and french press coffee! We decided to stay on Wood Lake today since it was going to be our last full day of fishing. We fished the narrows in the morning and did very well. Had a lunch of crackers and summer sausage and then we decided to hit a new area of the lake. We went into the bay on the way to the Hula portgage just around the point there is a large rock sticking up and then on the north side of that point it drops off. We had multiple fish on at one time and did very well for several hours casting Rapalas. These fish were larger on this point. After several hours of catch and release we decided to leave the area and head back there in the evening. We went back to the rock reef that we had fish previously and didn't do nearly as well. Had supper of fish and then went back to the honey hole and boy did it turn on again. I was fishing a slip bobber and leech and the leech wouldn't even get to the bottom of bobber stop and there was a fish on the line. It was non stop walleyes and we had a blast. 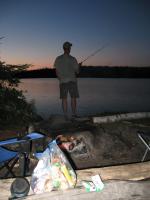 We left on early Friday morning and headed home. The portage out of Wood was brutal for us after not being used to paddling so much. All in all, lots of fun and we are planning on heading back again. I loved it, except for the mosquitoes and flies.