Trip Introduction:
Please enjoy our trip report from the 3 warmest days of winter.

The trek began on Wednesday, January 4th, 2012 on the tundra of North Dakota. The temperature was a frigid 47degrees Fahrenheit. My wife, Jenny, and I put Decoy (the black lab) in the overstuffed minivan and headed north to kidnap our friend, Joe, and his pack raft. From Grand Forks we headed east for a cozy night in the new solar powered building at the Adventure Inn in Ely, MN.

On Thursday we awoke to Decoy grunting with excitement in her kennel. After a short walk (because we would not be walking enough later in the day), we ate doughnuts and bagels in preparation for the day ahead. First stop, the Great Outdoors bait shop where we bought our bait and listened to the ice reports. Next was Piragis to pick up our rented Snowtrekker short-walled tent and stove.

Down the Fernberg road we went. Half way to our entry point, we saw two moose. This trip was looking up already.

We arrived at the Wood Lake entry point and unloaded the minivan. Joe inflated his pack raft while we unrolled our homemade toboggans (the McVacek Express 1 and the McShane Caboose) for their maiden voyage. Our toboggans are made out of silicone impregnated truck bed liner material manufactured in Fargo. The terrain was a bit different from their trial run on the flats of our barely snow-covered front yard. Luckily there was also a little bit more snow on the portages (4-6 inches).

After loading up our toboggans (ok so maybe overloaded is a better term) we headed down our first portage into Wood Lake. The first portage was 180 rods mostly down-hill. We quickly learned the toboggans slid well on the snow, but nearly ran you over on every hill. The arrest ropes became our best friends on this trip.

Once on Wood Lake we saw our only person of the day. Evidently the word was out that the fishing was good on Wood Lake. We did not stop to find out. As we walked across Wood Lake we were forced to strip down to our SmartWool because it was 50 degrees! We at lunch at the portage between Wood Lake and Hula.

Once on Hula we took a little detour thinking it would lead to a shortcut. Unfortunately the busy beavers had maintained a wide stretch of open water on the creek we were planning to take to Basswood Lake. Instead we took the steep 150 rod portage from Hula to Good Lake. Following the agony of that portage we made the wise decision to make camp on Good Lake. After 7 miles even Decoy was tuckered out.

We picked the campsite in the narrows of Good Lake. The campsite is up a steep hill/cliff with beautiful views. Unfortunately the hill/cliff made it impossible to pull the sleds up to camp. After we hauled all of our equipment up the hill, we went about making camp. As soon as the tent was standing, Decoy insisted upon calling it a night.

As I gathered firewood, Jenny and Joe made camp and lit the fire with one of our DuraFlame logs. Once I made it back into the tent it was somewhere north of 80 degrees. Joe stripped down to his flip flops and I began to cook. The menu for the night included fillet mignon, wild mushroom risotto, mixed vegetables, plastic bottled Outdoor Wino White Wine, and panna cotta for dessert. The wood stove (and the heat reflector turned oven) did a marvelous job for cooking some tremendous food.

While our bellies swelled, the temperature soared to 100 plus degrees. The tent was so hot all night long that I was forced to sleep on top of both sleeping bags, sweating. Not a bad turn of events when compared to the 39 below temperatures we experienced last year during our winter camping trip. Other than Joe’s popped NeoAir, and his concern about his pack raft blowing away once the wind came up, we slept very well.

We awoke to above freezing temps and sore muscles. We did not start the morning out quickly, but the smell of bacon, coffee, and cinnamon pecan pancakes soon perked everyone up.

After breakfast we gathered firewood and prepared for our daytrip to Hoist Bay on Basswood Lake. The trek to Basswood was much easier pulling just our fishing equipment. Jenny missed out on the opportunity to pull anything at all. After all, she informed us both that she would rather die in the wilderness than pull a sled.

Once on Basswood we headed for a promising fishing spot. On the way there we saw dogsleds pulling fishermen across the ice. Once we rounded the corner for our desired fishing spot, we were surprised to see 4 portable fish houses that had come in by dogsled. The guide steered us away from his fishermen by showing us where to fish (back in the direction we had come from). We took his advice and proceeded to set up some tip-ups for Northern Pike fishing. The first fish bit before the first tip-up was fully set up. It was a great day of fishing, and we were lucky enough to have fresh Northerns for dinner and breakfast.

Before the sun dipped too low on the horizon we packed up our fishing equipment and trekked back to camp. Dinner on day two was Jambalaya with fresh Northern, along with sweet potato fry bread. It was delicious. So much so we did not even have dessert.

Day three we sadly packed up for our return trip to the Wood Lake entry point. The temperature had dropped considerably (to a still balmy 20 degrees) and it was very windy. After battling a frozen camelback, and the steep portage from Good to Hula, the trip was uneventful. The last portage took a little longer simply because we were sad our trip had come to an end.

Overall it was a great trip. We stayed warm, we ate great food, and we spent 3 days worrying about nothing more than how to keep ourselves at 98.6 degrees.

The things we learned are plentiful: 1. The pack raft works, but does not carry enough gear. 2. We need better harnesses for the McVacek Express and McShane Caboose 3. DuraFlame logs are worth the weight 4. The heat reflector is great (we used a piece of aluminum stove pipe and still had snow directly underneath the stove) 5. Kneeling pads would be helpful to avoid wet, cold, knees 6. A planned lunch is not necessary, eating on the go works better 7. Always have a backup sleeping pad 8. Bring a roll of aluminized bubble wrap for placing under the sleeping area, on top of a tarp 9. Heating up rocks on the wood stove is great for tired muscles 10. A ladle makes it possible to get water without getting wet 11. You can never have enough bungee cords 12. A large percolator is great for boiling water, washing dishes and making camp toddies 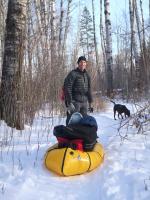 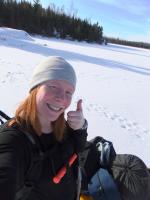 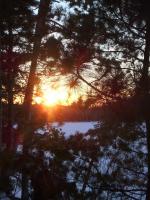