Trip Introduction:
We are a group of college students from the Duluth Area and decided that we would sneak a trip in before school started back up. We left home at about 5 a.m. headed for the Tofte Ranger station to pick up our permit.

We arrived in the parking lot for Hog Creek about 9:00 a.m. and unloaded all of our gear. This was our first trip into EP 36 and the stairs down to the river were a welcomed surprise. With everything loaded in the canoes we were ready to go. There was a group in front of us and we waited around for about 15 minutes to let them get ahead to avoid any congestion. After paddling for 10 minutes we caught up to them and they were portaging around a small set of rapids. Being the young, and smart people that we are we decided to try and push through.  There was what appeared to be a short patch of rocks and rough water....until we got passed the first set and realized the creek hooked hard to the right and there was another 100 yards of the same rough terrain that we had just been through.....We decided to portage. After learning a bit of a lesson the rest of the paddle on Hog Creek went rather smoothly.

We broke out into Perent Lake after about 2 and a half hours of paddling and found ourselves in some pretty big waves. Our map gave us a rough idea of where mostof the campsites on the lake were so after seeing that all of the visible sights from the entrance were full we decided to head north, hugging the shore.  After what seemed like hours of paddling on the lake in giant waves we were able to find a site. I understood quickly why it was open. The wind was blasting the campsite, but for now it was a welcomed relief. We found a few places to hide the tents behind some trees and set up camp. Excited to get our lines wet we headed out shortly thereafter to find out what the fishing situation would be like.

My two buddies had brought along a portable fish finder and were headed for deeper water. I however was with my girlfriend and she had very little interest in paddling and was all about the fishing. I told them that since I was paddling solo that I was going to head for an island where we could get away from the breeze a little. We brought 10 nice size eaters back, they brought 1. We were never more than a couple hundred yards from camp and it was an amazing experience.

After having fresh walleye for dinner, it was a relatively short evening with a little fire side relaxing and a couple of barley pops we were headed to bed.

This morning we awoke to more wind and waves. We held off on fishing until the early afternoon and what do you know, my buddies decided to follow us today.  The lake was beginning to clear of its campers and traffic was rather limited today. We did very well with the fish all the up until dark when we had to head back to camp. The "state birds" came out in full force at dusk and I learned my lesson from the first night, I was wearing pants and a long sleeve tee tonight and they didn't have as much luck on this night.

I usually take minnows with me to the boundary waters, but due to our lack of research on the area we were headed, when we got to Tofte we realized that the only bait shop around was the Holiday station in town. So, night crawlers it was. I have to admit that I was a little nervous going in with only one selection for bait, but I found out that there was no need to be because those fish would have hit anything we threw at em'! It was a catch and release day today because we would be enjoying brats and potato chips for dinner. We sat out this evening and listened to a Twins game by the fire and enjoyed a few more beers and called it a night. 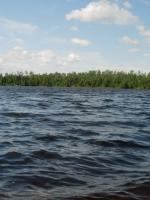 We woke up early to break camp this morning and found the weather to favorable for our paddle home. There was a nice and gentle breeze blowing at our backs with an overcast sky so the sun was beating down on us.

During the paddle on the creek we made pretty good time so we stopped for a quick swim on the way out. There is apparently a pretty deep hole out in front of the short portage! The water was cool and the trip was great!

I realize that this report is a little old, but I reserved a permit for Hog Creek again back in January and just revisited my photos from this trip and it got me excited to get back out there!

To Insula with the Boy Scouts
x
1973: Going Back in Time
1982: Volume 2, Going Back In Time
A happy ending
BWCA in strip built kayak in 2001
Lake One to Fishdance Lake
Lake One to Insula
Sept. Group Solo
Lake One to Insula
Gull Lake no Clear no Fire no Insula
A jaunt around the numbered lakes with Julia Child
Dixie's first BWCAW trip
Fishing madness
Lake One to Insula in August
The Elephant Trip
Lake One to Insula
Lake One loop to Snowbank
Lake One to Insula
A wilder trip
The Crew - 2007
Lake One to Insula Again
Everything Moves in Waves: A First Timer's Solo Trip into Boundary Waters
My first solo - lake one loop
The Big Insula Pike Trip - Oct 2007
First winter experience
Solo Trip Report -- Insula, Hope Lake, North Wilder
solo number 2
2008 Trip Form Lake One to Solitude and Back
Chronicles of a Day Tripper
Paddle n Puke
Lake One to Kawishiwi River
Solo trip from Lake One through Snowbank
Solo 2008 - a quick solo out of Lake One
May 2009 - Numbered Lakes
Lake 3
Lake One Loop through Wilder, Rock Island, Turtle and many more
Short and Sweet to Insula
BWCA 09
North Kawishiwi 2009
A (South) Wilder Trip
First Solo Lake One #30
First BWCA trip - Lake One to North Wilder
Sept 2009 - Lake One to Snowbank loop
Village Idiot Reaches Lake Three
Oct. Solo
Last Trip of the Season
Insula Base Camp (My Wife's First Trip)
Lake One to Insula
Tried to get to Insula
Lake One to Hudson July 28-31, 2010
Getting to know the BWCA over again.
Lake Three Adventure - No Regrets
The Numbered Lakes
Kicking Back on the Kawishiwi
Lake One; Getting off the beaten path.
Me, Three Blonds and a Mom. Again!
Lake One with the bag Family
another great trip
Bizarre event on Ima Lake - photos added.....
EP 30 to EP 27 Loop Solo
Family Aventure to Insula and back
Lake One to Inslula; Day Trip South Hope; Day Trip Fish Dance
Kicking Back on the Kawishiwi II (2013)
2 Families, 3 Generations
1st and maybe last solo
Lake One to Hudson Island
Insula 6-19-13
Fire lake solo
Family Excursion on Lake One/Two
Single mother, 6-year old, 5-year old Lake One Trip - HUGE success!
Scouting Dads Paddle the Boundary Waters
Lake One - Insula - Kawishiwi - Pagami Creek
bear attack
80 miles / 30 lakes *Float Stanley Trip*
Lake One to Alice - 4 days of sunshine
Family Trip to Insula
Mrs. Goby's first BWCA trip
Return to My First Trip Area
Powwow clearing Horseshoe Lake 3 portage south
Memorial Day Weekend
Paddle with Dad: Lake One to Insula
2nd Solo to Insula and a bit beyond
Lake One: First trip 4 and 7 year old grand daughters
Lake One to Insula, base camping with the family
Best Friends and The Big Jump: Lake One to Insula
Solo trip through the number lakes
2019 Troop 743 BWCA Trip
Lake One-Insula
Ice Breaker
2020 Alice Lake Trip
Pictographs on Fishdance
First time for the family - adapt and overcome
solo #2
solo #3
Minnesota Home
1st solo
Solo #4