Trip Introduction:
Wanting to try a solo trip, I planned a short trip from Hog Creek into Perent Lake. I planned on camping one night at Kawishiwi Lake Campground before entering the wilderness for two nights. Bad wind and boredom brought me out an evening early.

Left the Twin Cities around 2 in the afternoon and arrived at Sawbill Outfitters around 6:30. As I got out of my car at Sawbill, I instantly heard someone ferociously banging on a pot in the campground. Not only had a bear come into someone's campsite, it had tried to get into someone's car. I picked up my permit and solo canoe and then headed over to the Kawishiwi Lake Campground to spend the night before entering Hog Creek. I stayed at the same site two friends and I stayed at the night before a long trip in 2006 out of Kawishiwi Lake.

My alarm was set for 5am but I was woken up by a group entering Kawishiwi Lake at 4:45. Impressive. The mosquitoes were so bad, I quickly took down my tent and got into the car to eat breakfast in peace. I made it over to Hog Creek around 5:15 and was on the water paddling by 5:30. Despite having perfect weather early, there was also no wind, making the mosquitoes absolutely terrible. After reading that the only true portage along Hog Creek was usually able to be skipped if you line your canoe through two sets of rapids, I tried lining the canoe. This was a bad idea, as it took me about 20 minutes to get around the 15 rod portage. I would take the portage on the way out.

About a half mile downstream from here I came to my first beaver dam, which I was able to slide over with some poling. Unfortunately, the small current took my canoe into the side of the creek after clearing the dam and like an idiot, I hastily just pushed off shore with my paddle and swamped my canoe. I jumped out myself, which allowed my gear to stay in the canoe. After pulling my gear out of the canoe and putting it up on the beaver dam, I pulled myself up and dumped out the canoe. Then I set off again.

Amidst curve after curve, I was slapping mosquitoes non-stop. Finally about 2/3rds of the way to Perent Lake a breeze kicked up and the bugs subsided. As I got closer to Perent Lake the creek widened a bit and the paddling became a bit more pleasant. About two hours after leaving the entry, I was on Perent Lake, which was rolling with whitecaps already at 7:30. Still a little antsy from my swamping, I was able to get over to the close campsite just west of the Hog Creek's entrance into Perent Lake. I tied everything in, took out the binoculars to see if the island site was open. My plan was to head west to the next site west along the shore to see if it was open, then head over to the island site if it was taken. It was taken, and I had to paddle about a 1/4 mile across the wind-whipped main portion of the lake. I made it safely, glad to confirm the site was indeed open.

After unloading my canoe, I set up camp and put up my gear that had gotten soaked to dry. The rest of my day was spent napping, eating, reading, exploring the island I was on, fishing from shore and more reading. I enjoyed steak, asparagus and tomato and mozzarella salad for dinner. Then I ended the evening with some scotch, a cigar and the Twins game as I sat on a rocky point looking at a windy Perent Lake.

I had hoped to do a lot of fishing and a day-trip into Perent Lake over my two days on Perent Lake but thus far was unable to do either because of the wind.

I was woken up around 12:30 by some even stronger wind and rain. I quickly got out to put the rain fly on my tent, which had all my gear in it, then jumped back in my hammock.

I woke up to wind around 8am. A peek out of my hammock confirmed there were also whitecaps on Perent. It was also cooler this morning. I donned my fleece and made myself a breakfast of eggs, sausage, green peppers and cheese. After breakfast, I finished reading "A Season for Wilderness." It was my second time reading the book and it's still fun to read. Great Boundary Waters book. I fished some more from different points around shore without success and then decided that I was going to eat lunch and then head out. I was very disappointed at how bored I was but with nothing else to read and too much wind for me to day-trip west into the Perent River or go out and fish by myself, I decided to leave.

After struggling to get the canoe launched because of waves, I was able to paddle the waves easier heading east with the wind and soon I was back on the curvy Hog Creek. The weather was perfect once I got on the creek and I really enjoyed the couple hours of tripping on my way out. I took some timed pictures on the portage along Hog Creek and finally made it out in the early afternoon.

All in all, it was a good experience and I learned some lessons that will allow me to plan a better solo trip in the future, but I learned that I do really enjoy company while in the BWCA.

1. Bring better bug spray/lotion 2. On my next solo, I need to travel each day. Small lakes, rivers and creeks so the wind is less of a factor. 3. Bring more than one book. 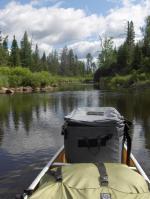