view flash version | view topographic map
South Kawishiwi River entry point allows overnight paddle only. This entry point is supported by Kawishiwi Ranger Station near the city of Ely, MN. The distance from ranger station to entry point is 21 miles. Access is a 140-rod portage to the river.

Trip Introduction:
Based on our experience on Gabbro last year (see Wind, Wind and More Wind trip report), we decided to return-hoping for the same success. Little did we know what was awaiting us. The other thing that had the potential of making this trip interesting is the fact that we had two rookies along and you're never quite sure how they're going respond to things up there. All I can say is that they were tested and managed to survive. 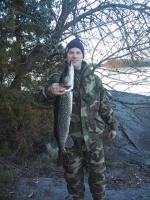 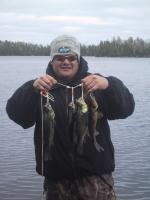 My Friday started around 3:30 a.m. I woke up thinking my clothes smelled awfully smokey from the fire the night before. As I rolled over in my sleeping bag I saw some flickering lights outside the tent and was baffled. Had one of the guys gotten up and started a fire in the middle of the night? I jumped out of the tent to find a fire outside the fire grate. Apparently one of the logs that the previous group had left near the grate was too close to our fire and had been smoldering inside. When the winds picked up in the overnight hours they stoked the embers in the hollow core of the log and flames were shooting out the end, and that was enough to send me into panic mode. I start rummaging through camp trying to find a pot to fill with water and douse the fire. All the while I'm in my stocking feet and nearly slip on the wet rocks into the lake on two or three occasions. After 6 or 7 gallons of water, the fire was out, and I went back to bed. The only problem was I kept having dreams of our entire campsite going up in flames and the USFS charging me with starting a forest fire. Not the most relaxing thought in the world. Later that morning, when I told the group what had happened, they were freaked as well as relieved because they thought it was a bear they heard tearing our camp apart. Regardless, that served as a glaring reminder that we needed to go out of our way to make sure every fire was thoroughly extinguished before leaving camp or going to bed.

As for fishing, Friday was okay. The winds had to be blowing at a steady 15 mph from the east and again this limited our fishing options. But Buzz17 and I found a nice honey hole on the south side of the lake out of the wind and landed some eating size walleye and some really nice perch.

After dinner it began to rain and rain and rain and get colder and colder. Despite the rain we still threw out the ciscoes and slip bobbers and once again landed a handful of northerns in the 33"-34" range.

It got cold Friday night--only an official low of 30 degrees but it seemed a lot colder than that and much to my dismay, we woke with at least a 1/2" of snow on the ground Saturday morning and more wind (imagine that!). I've been up there in May with some snow flurries, but NEVER with measurable snow on the ground, and I have a new found appreciation for those who go winter camping. In the back of my mind I was wondering if we should pull up camp and head back to Ely, but at the same time I realized I didn't want to pack up camp and paddle back to the entry point in those conditions.

While none of the guys were thrilled with the weather, we somehow managed to make the best of it. And since we'd come up to go fishing, we all bundled up and headed out, sitting in snow showers until 2:00 p.m. or so. Thankfully, we caught fish--more walleye, crappie and perch, though I honestly don't ever remember my hands being so cold while fishing, even ice fishing. It was nothing short of brutal.

Thankfully around 2:00 p.m. the snow showers stopped and the sun came out for a while. Hard to believe, but we were ecstatic when the temps climbed into the low 40's. And like the previous two days, we threw out more ciscoes on slip bobbers and we caught more large northerns. The largest that night was a 36" hog.

Sunday was by far the best day--at least it was sunny and warmer. But the winds once again picked up and limited where we could fish, and the fishing was the slowest it had been the whole time we were there. Thankfully, we did manage to catch enough for dinner, and while we were getting dinner ready, we fell back on the ciscoes and slip bobbers one more time. The action was slower, but I managed to land another 34" northern. 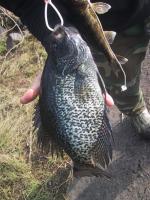 Time to pack up and head back to reality. But once again the winds were howling. They had to be in the 15-20 mph range with gusts near 25 mph. Paddling across Gabbro I had visions of the opening scenes of Hawaii 5-0 in my mind with the way the waves were crashing over the bow of the canoe. Thank God for Gore-Tex.

Of the eleven trips I've done in the BWCA this was by far the most challenging. I've done a trip in May for the past four years and each year it only seems to get colder and windier. So next year, I'm shooting for the second week of June. I know the weather in June can be almost as bad (it was on my first trip in June 2000), but I just can't seem to beat the odds and get decent weather up there in May. I think one of the guys summarized our trip quite well when he said, "It's not a vacation, it's an adventure." Nothing wrong with that, but I'd rather have just a little more vacation and little less adventure for a change. Hope you enjoyed reading this or at least found it helpful. If you have questions or would like additional details, feel free to e-mail me.