view flash version | view topographic map
South Lake entry point allows overnight paddle only. This entry point is supported by Gunflint Ranger Station near the city of Grand Marais, MN. The distance from ranger station to entry point is 47 miles. Access is from Gunflint Lake with a 10-mile paddle and two short portages to South Lake. This area was affected by blowdown in 1999.

Trip Introduction:
Annual "Beavers" trip to the BWCA . . . four sisters who have been coming up for the past five years. Few portages, heavy paddling. I would have rated this an "easy" except for the Stairway Portage which other campers we encountered were terrified of. We didn't find it too bad. This was our second encounter and we knew to take it slow up the stairs and then everything levels off nicely.

This was our annual "Beavers" trip to the BWCA . . . four sisters who have been coming up for the past five years. I would have rated this an "easy" except for the Stairway Portage which other campers we encountered were terrified of. We didn't find it too bad. This was our second encounter and we knew to take it slow up the stairs and then everything levels off nicely.

We rented a canoe from Hungry Jack Outfitters and bunked with them the first night. Once again, highly recommended.

Day one, Andy from HJO, got us all set and then drove us up to Gunflint Lake for a rendezvous with Dick Smith with Gunflint Pines. Dick towed us across the Gunflint Lake (did I say we are AGING sisters??). We had never done this before and it was a nice way to start out the trip. We were able to see the devastation from this year's fire, but also were surprised to see the green undergrowth already covering the ground. It really is uplifting to see how quickly the area rejuvenates. There were a few cabins that were starting to be rebuilt, too.

Dick dropped as at the east shore of Gunflint Lake, at which point we took inlet 9 3/4 to Little Gunflint. This is meaningless unless you've read Harry Potter . . . but it's an inlet that unless someone points it out, you CANNOT see it. It was a magical thing to watch the first canoe paddle up and through to the next lake.

We paddled to Little Gunflint and Little North, then walked our canoes through the portage to North Lake. We did an easy portage to South Lake and spent the night on the first campsite on the right as you come out of the portage. This was a fun campsite. We could swim across to Canada!

Day 2 we paddled South, then portaged in and out of Rat Lake (aptly named) and nabbed the second campsite on the right as you come out of that portage from Rat on Rose Lake, where we spent two nights. It was a great site - far enough from both portages so it wasn't a "highway", good exposure, great tent pad, nice fire area with a view of the lake, and a good swimming beach. There were lots of other nice spots on the lake, but we decided to take this one because we were TIRED after the day of paddling. The wind had picked up and it was a tough paddle. There was a funky odor at this site, probably from fish guts that someone left. The wind shifted every once in a while and the odor got REALLY bad.

After we set up camp and swam, we paddled over to the Stairway portage and hiked up to the waterfall, then the bridge, and up to a vista on the east side of the portage. It was beautiful, but the height made my stomach drop. If you do this with little ones, make sure you hold on tight! We asked Dave from HJO afterwards if there are ever accidents, and he said "surprisingly no".

Day 3 - same campsite on Rose Lake. We paddled back to the portage and this time hiked west of the portage up to the highest vista on that side. I haven't put the route into my GPS software so I'm not sure of the total distance, but it was a healthy hike. We hiked past a small pond and then reached an area where we could see Partridge and Duncan lakes to the south. We came upon some incredible raspberry patches and picked a small tupperware container full for the evening's dessert (chocolate raspberry crunch) . . . ate our fill . . . and still left PLENTY for other hikers and bears. We did find some bear scat - full of berries. We reached the vista and lunched while watching a few other canoe-ers make their way from South to Rat to Rose. It was pretty cool.

Day 4 - left the BWCA by doing the Stairway Portage to Duncan, then to Bearskin, and finally to Hungry Jack where we paddled up to the HJO dock. Gorgeous day - wonderful way to exit the BWCA, with the sun shining on the water and a gentle breeze.

The weather was great - sprinkled for about three minutes one day but otherwise was warm (if not hot) until 8/12 where we had almost fall-like weather.

The meteorites were incredible . . . we had forgotten that this was supposed to be a peak weekend and were fortunate to stay up past dark on our final night. We were rewarded with a show for a few hours!

The bugs were so-so. I only applied bug spray once (when we stayed up to watch the meteors), but we usually went in the tent when they got pretty bad. But all in all, I'm not very chewed up at all.

The only down-side to the entire trip was the traffic on Rose Lake. The lake is big enough where once on the lake, it's not a huge deal to see canoes in the distance, but the portage was like Grand Central Station. There are several campsites (I think nine) on Rose Lake and if everyone visited the portage in order to hike once per day (like we did), PLUS you have people day-tripping, it can get pretty busy. We were OK with it, but if you really are seeking solitude, this trip wouldn't be for you.

Oh yeah, two sisters fished and had some luck with bass. Nothing major, but we did eat fish for two nights in a row!

Our biggest life-threatening adventure was on the way home. One sister and I drove through Wisconsin so I could pick up my kids who were staying with my parents while my husband worked. On the way home, we drove through New Richmond and Roberts just as the bad storms were approaching. We almost lost our canoe, had to pull off of 94 into a ditch to readjust (in the pouring, driving rain), then inch along to the Somerset exit where we spent a good hour at a truck stop, waiting for the storm to pass. We heard from our husbands that we had about 30 minutes to make it to Eagan before the second wave hit, and we literally just made it! 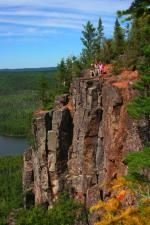