view flash version | view topographic map
Baker Lake entry point allows overnight paddle only. This entry point is supported by Tofte Ranger Station near the city of Tofte, MN. The distance from ranger station to entry point is 26 miles. Access is a boat landing at Baker Lake with a 10-rod portage into Peterson Lake to reach first campsite. This area was affected by blowdown in 1999.

Number of Permits per Day: 3
Elevation: 1497 feet
Latitude: 47.8452
Longitude: -90.8169
Summary: A 5-day loop from Baker up the Temperance lakes to Cherokee, and back through Sawbill and Smoke lakes back to Baker. A fairly difficult trip.

Day 0: We drove up from Stillwater in the morning and camped at one of the 5 walk-in campsites at Baker Lake, and it was nice.

Day 1 (Baker to S. Temperance) - A beautiful day, we decided to paddle all the way to South Temperance the first day which was a great paddle with easy portages except for the last one. We picked the campsite on top of a huge rock that was close to the middle of the lake. Tried fishing some but no luck

Day 2 (Rest) - In the night, we encountered the worst storm of the entire season. While we were there 19 people had to be rescued from the BWCA. We had about 50mph straightline winds, and I'm still surprised that the huge tent we had stood up to it. We slept in and took a rest day because of the intense winds. Amazingly beautiful sunset.

Day 3 (S. Temperance to Cherokee) - We left as early as we could to beat the heat, but it was no good. The lengthy, hilly portages were challenging and by the last portage we were pretty beat. We overpacked and single portaged which led us to speedier exhaustion. Still amazing weather. North Temperance was a beaut- I wish we had stayed there instead of South. We took the southeasterly facing campsite on Cherokee on the southeastern skinny island. Neat little site.

Day 4 (Cherokee to Sawbill) - Left a little later in the day but it was ok. We took our time going down the river letting out of the southwest part of Cherokee and it was a great area. BEWARE: The area between Ada and Skoop Lakes appears to be floatable, but a dam built recently has made the portion impossible to float. Be prepared for a long portage through muck and water. A guy that we saw there said he had been going to the BWCA for 40 years at least once per year and it was the worst portage he had ever seen. By the time we got to Sawbill it was pretty hot. We paddled all the way down to the site next to the portage onto Smoke.

Day 5 (Sawbill to Baker) - Cooler, cloudier weather for the first time on the trip. We were pretty hungry (I underpacked food a little and I felt really bad) and we were taunting each other with vivid descriptions of the burgers we were going to eat ASAP after getting out. We paddled back to Baker and returned our gear to Sawtooth outfitters.

Trip Introduction:
I had the stars align at the last minute for a quick weekend trip to try my hand at going solo. After searching for available permits and tapping into the great members on this site, I decided to enter EP 39, Baker Lake on Friday evening and loop up through Sawbill and Cherokee before coming back to Baker lake via the Temperance River flowage through Jack and Kelly. I'm not a big trip report type of guy, but I do like to take photos. What follows is a brief photo essay of my trip. Note that I took far fewer photos than anticipated since I needed to cover a lot of ground in basically 2 travel days.

Morning at my campsite on Kelly Lake: 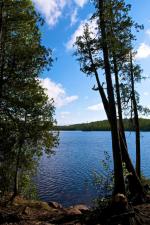 [paragraph break] Burnt Lake: This was a great day with lots of slow moving fluffy clouds. I love how these type of clouds lend themselves to interesting lighting patterns on landscape features.

[paragraph break] Loon on Burnt: This loon was completely fine with me getting in close for a nice portrait. Usually they aren't so vain.

[paragraph break] The recent thread on solo self-portraits got me thinking. I'm glad I brought the tripod ;-) 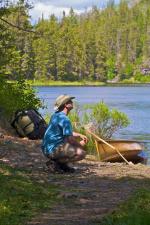 [paragraph break] Cherokee Creek - one of my favorite areas of the trip. Unfortunately I didn't see any Moose... I did, however, notice some stowaways on the bottom of my canoe when I got to the camp on Cherokee Lake. A couple of leaches were trying as hard as they could to suck the blood out of my kevlar Wenonah C1W. [paragraph break]

[paragraph break] Cherokee Lake Campsite - this site had amazing 360-degree views from a nice elevated point. This was a much nicer place to star-gaze than the bug-infested site on Kelly.

[paragraph break] A few sunset photos from Cherokee Lake. I didn't have any of the drop-dead, blow your mind, dramatic sunsets I've seen on previous trips. With that said, there was something elegant about this subdued sunset. Looking SE from my site:

Looking W from my site:

This was a perfectly still morning - a true BWCA classic. I only took photos on Cherokee Lake this day as I had a lot of water/ground to cover before driving back to St. Paul. [paragraph break] Morning on Cherokee:

[paragraph break] Quite the Rocky Portage Landing from Cherokee to Sitka - a true indicator of the nature of the trail ahead: