view flash version | view topographic map
Sawbill Lake entry point allows overnight paddle only. This entry point is supported by Tofte Ranger Station near the city of Tofte, MN. The distance from ranger station to entry point is 25 miles. Access is a boat landing at Sawbill Lake. This area was affected by blowdown in 1999.

Trip Introduction:
My husband and I, and our daughter and her sherpa (aka boyfriend of 3 years) left home at 2:30 am on Friday, June 3rd. We didn't have time for a long trip because school wasn't out yet for me, and our daughter was leaving the next week for her summer job as a Girl Scout Camp counselor, and would be gone until just before she went back to college in the fall. The plan was to enter at EP 38 – Sawbill Lake, take the 30 rod portage to Alton Lake. Paddle to the south end of Alton Lake and take the 200 rod portage to Wonder Lake. It's a dead-end lake, so we figured it's not used quite as much as those on Sawbill and Alton. We would base camp for 2 nights and head home. We wanted to fish a little, take pictures and just relax.

The three hour drive to Two Harbors was uneventful through the construction on I-35 and through Duluth. When we arrived in Two Harbors, we were disappointed that our favorite breakfast place, Judy’s, was not open until 9:00 am! McDonald’s it was. We had enjoyed an early morning breakfast at Judy’s for almost 10 years! I guess cuts have to be made everywhere.[paragraph break] Because breakfast was fast food, we arrived at the ranger station in Tofte early and actually had to wait for them to open at 7:00 to pick up the permit. The rangers informed us that the blackflies had just hatched. They also warned us that some weather was moving in, and we could get some strong winds and hail.[paragraph break] On Sawbill, there was a slight breeze and cloudy skies. Once we were on the bigger water of Alton Lake, the water was a little choppy, but not too bad. We could see that the clouds were getting darker, and could hear low rumbles of thunder. As the storm moved closer, we moved closer to shore, so if it got bad, we could get off the water quickly. We continued toward the south end of the lake. Suddenly it started to sprinkle, and we could see the rain sweeping across the lake. "Here it comes, we're in for a soaker," I thought. It actually only rained for 2 or 3 minutes. That was all. By the time we made the south shore, we were dry.[paragraph break] My husband and I had been to Wonder Lake 6 or 7 years ago. The portage was a little tougher than I remembered it. Not too much change in elevation, not too rocky or too muddy, just long. We had to go through several areas pushing through the pine branches on either side of the path. Plus there were 3 large trees down that we had to climb over. Add to that, the swarms of blackflies that attacked any exposed skin.[paragraph break] We checked out the first campsite. My daughter didn't like it. So we went to the other site. She liked it better, so camp was set up. Much to our surprise and delight, someone had left a very nice stack of cut and split firewood next to the grate. The first evening was spent playing cards and going to bed early.

[paragraph break] The next morning, after a breakfast of pancakes and bacon, we took the creek upstream to Sunhigh Lake. Neither of the lakes are very large, but Sunhigh must just be oriented in the right direction. The breeze on Wonder and the creek was a headwind, nearly creating whitecaps on Sunhigh. We didn't have the motivation to fight the headwind across and continue on the creek to Sunlow Lake, so we headed back to Wonder.

[paragraph break] After lunch, my daughter and her boyfriend paddled off alone, while my husband and I went fishing. When we gathered back at camp to make supper, she asked me how fishing was. Since we hadn't caught anything worth eating, I told her it was pretty crappy. She smiled and said, "I didn't do too bad," as she held up her left hand for me to see her new diamond ring! Much celebration and planning took place over a meal of polish sausage and macaroni & cheese. 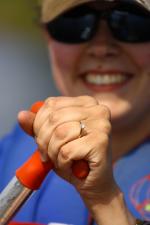 [paragraph break] In the evening, the breeze had died down, and the relentless blackflies could not be held at bay, so we paddled out on the water. We came across a pair of loons and played hide-and-seek with them. It was fun to watch them go under, and guess where they would come up. One would appear, and call out. It sounded like, “Where aaaare you?” We would paddle over, and the other would come up near where we had been. This went on for almost an hour.

[paragraph break] As the sun was going down, we headed back to camp. The firewood came in very handy to smoke away the bugs. The sky was clear, and we hoped for some good star watching. The boyfriend set up his camera on a tripod and programmed it to capture the movement of the stars overnight. It looks really cool when it works. Unfortunately, this time, it didn’t work because the camera battery died before it got fully dark.[paragraph break] Sunday morning, we breakfasted on instant oatmeal and granola bars, packed up camp and headed out. It was a blissful weekend with tons of memories made.