Lake One to Fishdance Lake

Thursday, June 03, 2004
We left Nebraska at about 11:00 on Wednesday night and drove straight through to Ely, about 14 hours. Our group consisted of Me, 4 Rookies and 2 Guys on their second trip. The Drive was pretty uneventful, we decided to take the scenic route by driving from Two Harbors to Ely and got temporarily misplaced for about an hour. We arrived in Ely around 3:00 and went to our Outfitters. I won't name our outfitter, but lets just say that they were difficult to deal with and I won't go with them again. I have always used Voyaguer North before and been happy, so thats who it'll be next time. Anyway, had an excellent dinner at Stony (something? i can't remember). Hit the Portage for drinks before retiring at 10:00.

Friday, June 04, 2004
Our outfitter dropped us off at the lake one entry, and the rookies took a little while to get used to a canoe. I think the biggest adjustment was trying to comprehend the speed at which you move. There were several discussions about where we were on the map and how long we had been moving. Our outfitter had set us up with 2 17' Royalex Penobscots and a 18' Alumacraft, and the 3 rookies in the 18 footer were struggling with maintaining a straight track all day. The two portages into Lake Two are a piece of cake and we pick up a couple of northerns trolling rapalas. (Note: Fishing was slow this trip, so i am not marking fishing spots on the maps.) Lakes Three and Four were pretty but uneventful. My roommate, who is in my canoe, cannot get over how peaceful it is out here. The three small protages to Hudson Lake are no big deal. They are fairly level and are well cleared. We chose to camp on Hudson and selected the campsite on the map. After dinner, me and on other guy decided to go and explore Ahmoo Creek, where it feeds into Hudson at the south arm. We got maybe a half mile up it, and it became to shallow and congested to try to manuever it in the dark. Not to mention, the mosquitos are absolutley horrible. I saw my first Pine Marten up close as he tried to rob a food pack that we hadn't hung yet. Anyway, today was kinda tiring for the the rookies, and they aren't looking forward to the 95 rod portage to Insula first thing in the morning, so everyone hit the sack early. 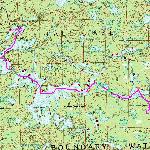 Saturday, June 05, 2004
We finally get camp broke and head for the portage to Insula. Nobody can believe that I think its easier to carry a canoe 95 rods by myself than havin a guy on each end. Anyway, the portage to Insula is a breeze, and everybody is lokking forward to today, because we have time to mess around. We spend most of the day cruising up Insula, and when we got up to the north end both of the campsites we wanted were already full. We decided to push on a little bit and camped at the site in orange on the map. This campsite doesn't look like much from the water, but it is actually very nice. It has a good log setup and is sheltered from the wind. We cook up some walleye we caught on Insula for dinner. I watch Eric, who brought whiskey in the same color nalgene as my cooking oil, take a shot of Pure Canola Oil on accident. Eric and I go explore a northern arm at night, and don't find much. It starts to rain and we all sack out for the night. 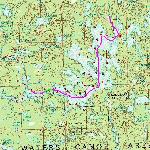 Sunday, June 06, 2004
Today is the day that everyone has been looking forward to. We get to leave camp set up and go on a day trip. On the way to the toilet, i spot the ruffed grouse who has been calling all morning.(they make that really deep thudding noise that speeds up towards the end.) We pack just what we need for the day, and head out. We spot a cow moose and 2 calves about a 1/4 mile from camp. (marked on map) The Smallmouth were hitting good in the pool right above the rapids between Insula and Alice lake. We didn't know if the south arm of Alice would be passable, but it was, plenty of depth and not too much current. Crossing the south part of the main body was a little tricky. The whitecaps kept things interesting for the rookies, who decided to paddle sideways to the waves instead of angling across them. The portage to Fishdance wasn't to rough and the pictographs were pretty neat. Eric, Rick and Shane decided to cliff jump. (I don't recommend this to anyone.) They all survived and we headed back to Insula for another night. 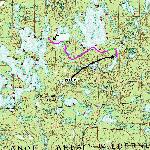 Monday, June 07, 2004
We wake up to high winds coming at us, so we hop from island to island on the way to portage to Hudson. We portage no problem, and decide that from Hudson we will go up to Fire lake and loop around back to Lake Four, hoping that the wind won't be as bad. As it turns out, this little loop is the most beautiful leg of the trip. If you have the chance to do this little side trip, I strongly recommend you take it.  The small portages are a little difficult, but it is well worth it. Anyway, we couldn't avoid the winds, and it started lightning towards the end of the day. We set up camp, have some northern pike/tuna helper gumbo that my buddy whips up, and it starts to rain. Not just a sprinkle, a massive downpour that blocks our view of anything. Then came the hail. So anyway, we all hide in tents until the morning. 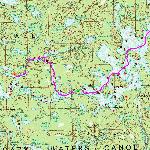 Tuesday, June 08, 2004
We had high winds again today, but we had to meet our outfitter at Lake One at 3:30, so we busted butt to get there. There isn't much more to say about day 6 other than everyone was exhausted from the fast pace and moving into the wind. Anyway, I think everyone enjoyed themselves despite the lack of fishing success. Everyone is already talking about next years trip, and the rookies are all talking about what they will do different next time. I would have liked to have posted more pictures, but not many turned out. Anyway, I'm heading to Algonquin Provincial Park in about three weeks, so I'll have something to look forward to before my fall BWCAW trip. If anyone wants more specific info, just post and i'll see what i can do.