Lake One to Insula

Trip Introduction:
This is my second trip to BWCA and longest trip. The other people have gone for around 20 years or more. We just found out that insula got bass in it so we decided to go there this year for our annual trip. When the other guys went there earlier there were no bass.

Saturday, June 16, 2007- Three of us came(including me) from Wisconsing while the other three are from Minnesota. Us three camped at a campground by superior last night and we got to the station at 10:15am Saturday. We left the station at about 11:00 and made last minute stops and got out on the water at 12:45. We wanted to get to insula in one day but we werent sure of it and we thought we would make it to hudson. Weather was basically perfect with a little wind at our back. We got through the hudson-insula portage at 6:00 and decided to try to get to a campsite suggested by a person's son who said it was a 4 star. The campsite was occupied so we decided to camp at the site SE of Williamson Island at 8:30. 15 miles in one day exhausting.

Sunday, June 17, 2007- A cloudy morning with some wind. We saw a group of canoes pass our site. My dad and i went fishing around an island and noticed that the campsite we wanted was open. It is west of the narrows and north of Williamson Island. As we were at that campsite it started to rain so we left a pack there hoping noone would take it. When we were paddling back it started to thunder and lightning. We decided to move camp during the storm so we wouldnt lose the site. We got the campsite(i thought 5 star) and finially got fishing at 8:00pm when it stopped. We got a few SB and a pike.

Monday, June 18, 2007- I heard rain on the tent when i woke up. We fished in the rain and caught around 12 of Walleye(Dub Ya) by the east side of the peninsula to the west of our campsite. We didnt do so well at night in the same spot.

Tuesday, June 19, 2007- Rain and wind was the story of today. Winds were really high today so we went to fish in the bay by the Kiana portage. We did okay and we got a 17inch SB(my dad) and 22 pike(me) on a double whammy by the beaver house. 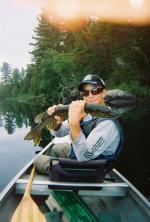 Wednesday, June 20, 2007- Wind was the story today with some rain during the night. 2 people had to leave today back to the EP. We werent sure if they would make it because they left around 9. It took us 8 hours on one day but they were against the wind the whole time after insula. We caught three fish during the day time.Only one big SB 17in (my biggest ever) We had to fish around camp because the high winds. But since fishing wasnt great on insula we decided to check out Cache Lake. It has dark water and we didnt catch a fish but we got about 100 feet from a bull moose and it was the first moose i have ever seen and it was huge! The wind was pounding the north shore so while we were fishing before dark we decide to troll the north shore before we got to our fishing spot. I caught a 17in Dub Ya(my biggest ever) and 14. We got to the spot where we wanted to and my dad caught a small SB. We troll the rest of the night where i got the first 2 fish and got a total of 9 fish. Good size with 16 Sb, and two 17 Dub Ya. 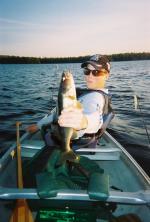 Thursday, June 21, 2007- Today since it was the first calm fishing day we went to the same spot as the night before. We did pretty good i caught 17in SB(my biggest ever), and 26in pike(my biggest FISH ever). It rained a little but not much. Tonight we went to the same spot and trolled and did ok. i got a 19in Dub Ya(my biggest ever and no picture because I ran out of them). Today was my best day of fishing not quantity but quality. Today was also the first day that we could have a full day of fishing because the weather was good. 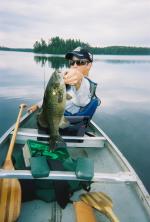 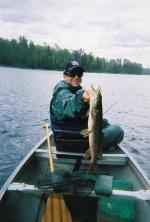 Friday, June 22, 2007- We decided that we didnt want to go 15 miles on our last day because we could have bad weather like the other guys so we wanted to go to hudson. It was sunny and a little wind.We left our 5 star camp around 9:30 we took a secret portage by the west side of the lake and we thought it would cut time but it didnt it still took 2 hours to get to the insula-hudson portage. we decided to move on to lake four to camp. we got there around 1:30 and set up camp. We got out fishing around 4 by the NE long bay of the lake by the fire lake portage and brought back Dub Ya and a bass which was only our 3rd fish meal of the trip. The first day without rain.

Saturday, June 23, 2007- We left camp a little before ten and thought we'd be out by 1. We got through the portages fast but they sure were crowded. We got to the EP around 1 and packed up. A successful trip with no major injuries, decent fishing, and poor weather. i got around 50 fish in the trip.