Trip Introduction:
We left IA. for the wilderness of Northern MN. about 7:30 Sat 6-25 making a fishing rod stop at the huge sidewalk sale at Cabelas in Owatanna before arriving in Ely and VNO about 2:30 in the afternoon... My son, Nick, and I checked in with Lynn at VNO and got the bunks for the night and also picked up our permit at the Wolf Center while waiting for the arrival of Adam, the "other" son... That evening we shopped Ely for some take home t-shirts and dined at Cranberry's with their awesome rib special (recommended by all of us), packed our gear and hit the sack to rest for the start of our 2005 adventure..


Left the Mudro start point after checking in at the parking lot...about 8:30 A.M. and headed for the
Fourtown portages..known for their rocks....Passed through Fourtown, into Boot, Fairy, and Gun before
arriving at Gull about 2:30 P.M.

With no one else on the lake, we had our pick of the three sites, choosing the first...
We setup camp and fished from shore off the rock points..picking up several wallies and smallies before
supper.

Supper that night consisted of ribeyes mashed potatoes and peas and carrots....really hit the spot after
paddling that day...

After cleanup we launched the MN3 to the opposite shoreline, hoping to re-locate the Walleyes we'd
found in 2001...caught a few but not like previously...

Paddled back to camp and built a nice pre-bed fire. That night we were awakened to a thunder and
lightening show complete with the downpour...

After breakfast of homemade biscuits and sausage gravy and breaking camp, we headed back through
Gun and onward to the "BIG" 326 rd. portage into Wagosh....(we all decided we wouldn't like to hit one
like that to many times a day). From Wagosh..to Niki, Chippewa, and Papoose via Papoose creek and 1
beaver dam and one portage we arrived at our destination--Friday Bay on Crooked Lake.. This would
"our" lake for the next couple nights..

Set up camp on the second site in and just in time too...welcome to Crooked Lake, a storm like we'd
never experienced in the BWCA complete with snapping trees and the lake being swirled of the surface
in sheets... Glad it lasted just a short time.

After supper of Mexican Brats..(Bratwurst wrapped in flour tortillas) we hit the water in search of the
fish....Smallmouth Bass.. Caught several smallies and several northern, including hooking but not
landing a big pike that we estimated 30+"...no fish story!
We crashed at dark trying to escape the ankle-biting flies.

Our 3rd day was about picture perfect for fishing....started with blueberry pancakes and pure maple
sryup.

With 5 hours+ on the water, we fishing several coves and picked up alot of nice fish, including a mess
for supper. we also checked out other campsites for the future..Finding one that would make an
excellent basecamp for any group...complete with easy chairs and moss cushions on the seats..
After our supper of smallies and scalloped potatoes with banana cream pie, and clean up, we once
again hit the cove around our camp.. 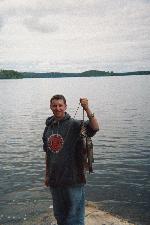 Oatmeal and coffee and we packed up heading into a wind back towards Fourtown and some
Walleyes..retracing our path to Fourtown seemed easier this time... of course the food pack is getting
lighter and we also combined two packs to eiliminate one.

We arrived at a camp on Fourtown, bucking a good head wind and about 1 1/2 ft waves. This camp was
nice but we could tell that we were in an area closer to the edge of the BWCA as the camp really looked
used and had foil and cigarette butts littering the fireplace and the area.. The wind got stronger so we
decided to explore while gathering firewood..

We enjoyed finding and eating some blueberries (not alot, but they gave us a taste and fueled the
prospect of planning a future trip to coincide with possible ripe berries...
Our hard food pack, which had provided our cold food had served its purpose and we mixed the gallon
jug of melted icewater with Gatorade. and enjoyed tacos and Gatorade and cooked apple delight for
supper... Built a fire and enjoyed the evening despite the windy conditions...

We felt confident that Thursday would be a good fishing day on Fourtown...

Morning was welcome and we hoped for clearing skies and sun and no wind ....INSTEAD....wind and
rain welcomed us....Good thing wa had our tarp up, as it blocked the wind and rain and provided us
with a place to sit and cook via the Whisperlite...Whipped up the eggs and last of the cheese for a great
breakfast burrito... AND

Settled in to a day of shore-sitting and watching the waves and the mist which moved across the lake
all day long....

About 12:30-1:00 P.M. we watched a group of four canoes struggle against the waves to make it to the
saftey of a campsite down the way...and we all agreed that the waves and wind were increasing...

Our last supper ( we Hoped) was excellent... Spagetti and a sauce w/morels which I had dehydrated at
home, and peaches and cream pie. Oh yeah, and hot chocolate to ward of the chilling winds...

After sitting in the wind all day we decided to retreat to the warmth that our Timberline 4 provided and
zipped in at about 7:15 P.M.

About 8:15 we noticed a different sound....the wind had switched.... hopefully that was a good sign...
of maybe a break in this front that had been with us for two days.. We crawled out of the warm dry tent
to rain and lowered the tarp, which had become a sail instead of a shelter and wrapped it over our
packs in an effort to keep things dry.

Waking about 5:45 A.M. we noticed the wind although still blowing...was much less...

We had a light breakfast of granola bars and the last of the filtered water which was mixed with Crystal
Light orange drink...Tore down the tent and packed up for the last leg of our 2005 BWCA trip...

8:00 A.M.
Paddling with the wind, we left Fourtown and headed towards Mudro and the stop point at CHAINSAW
SISTERS SALOON....anticipating beverages of something other than filtered. The rocky portage was a
snap...we were becoming portage ready-and-able at the end of the trip...HA.

After "relaxing" at THE SISTERS and enjoying the brews and reminicing the just finished trip and
PLANNING THE NEXT ONE...we drove back to Ely for a hot shower followed by a GREAT Buckie Burger at
the Ely Steakhouse.

We said our goodbyes to Adam, and Nick and I made the 6 1/2 hr trip southward back to the green
cornfields of Iowa and home until next time we venture into the wilderness of the BWCA... 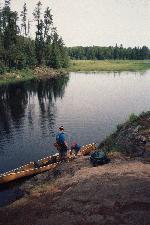